Khorasan - The Core of Asia 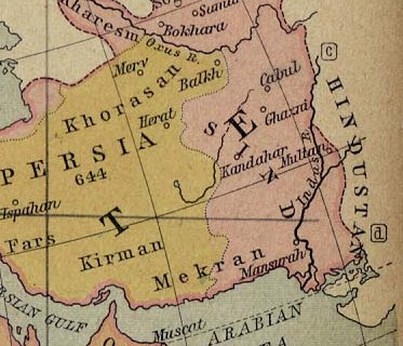 Greater Khorasan or Ancient Khorasan (Persian: خراسان کهن یا خراسان بزرگ) (also written Khurasan) is a historical region spanning what are now northeastern Iran, most of Afghanistan, and the southern parts of Turkmenistan ,Uzbekistan and Tajikstan.[1][2] The name "Khorasan" is derived from Middle Persian khor (meaning "sun") and asan (or ayan literally meaning "to come" or "coming"), hence meaning "land where the sun rises".[3] The Persian word Khāvar-zamīn (Persian: خاور زمین), meaning "the eastern land", has also been used as an equivalent term.[4]

Khorasan in its proper sense comprised principally the cities of Nishapur and Tus (now in Iran), Balkh and Herat (now in Afghanistan), Merv (now in Turkmenistan), and Samarqand and Bukhara (now in Uzbekistan). However, the name has been used in the past to cover a larger region that encompassed most of Transoxiana and Soghdiana[5] in the north, extended westward to the Caspian Sea, southward to include the Sistan desert and eastward to the Hindu Kush mountains in Afghanistan.[4] Arab geographers even spoke of its extending to the boundaries of ancient India,[1] possibly as far as the Indus valley, in what is now Pakistan.[2] Sources from the 14th to the 16th century report that Kandahar, Ghazni and Kabul in Afghanistan formed the frontier region between Khorasan and Hindustan.[6][7]

In the Islamic period, Persian Iraq and Khorasan were the two important territories. The boundary between these two was the region surrounding the cities of Gurgan Damghan.[4] In particular, the Ghaznavids, Seljuqs and Timurids divided their empires into Iraqi and Khorasani regions. The adjective Greater is added these days to distinguish the historical region from the Khorasan province of Iran, which roughly encompasses the western half of the historical Khorasan.[8] It is also used to indicate that ancient Khorasan encompassed a loose collection of territories individually known by other popular names, such as Bactria, Khwarezmia, Sogdiana, Transoxiana, and Sistan or Arachosia.


Khorasan was originally inhabited by the ancient Indo-Iranians who migrated from the north to the Bactria–Margiana Archaeological Complex in around 2000 BC. The BMAC was a Bronze Age culture situated in the upper Amu Darya region of Khorasan. Airyanem Vaejah (Land of Aryans), which is mentioned in the Zoroastrian Avesta, is also believed by some scholars to be situated in the territories of Khorasan.

The Persian people appear to have been the first ethnic group to populate the region, but they began mixing with an increasing number of foreign invaders and as a result their proportionate number was reduced.[21] Significant immigrants such as Arabs from the west since the 7th century and Turkic peoples after the Turkic migration from the north in the Middle Ages settled in the region.

The land that used to be refered to as Khorasan in the past is inhabited by a multiethnic society today. The majority are Persians (including Tajiks and some Lurs) and the rest are Uzbeks, Turkmen, Hazaras, Aymāqs, Pashtuns, Baluch, Kurds, Arabs, and others.[21][22]