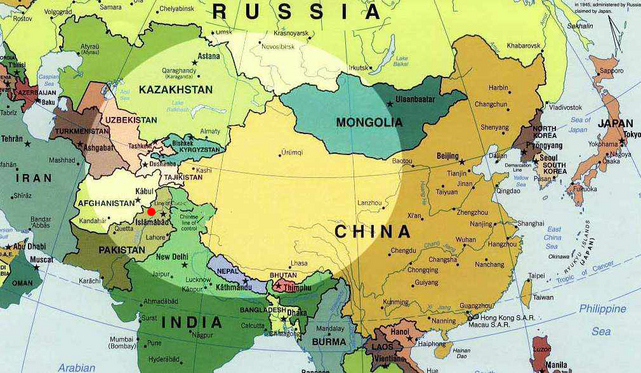 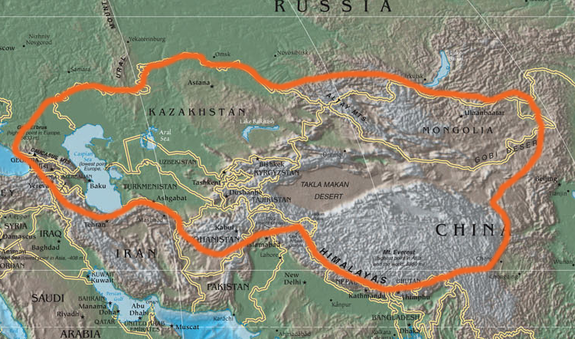 There are many definitions of what the boundaries for the Central Asian region should be. The term itself is historically very recent, being a creation of 20th Century geopolitical considerations.

I, as a resident of this area and of its cultural milieu - would prefer to define it in the older and more traditional manner, which lacks "modern" exactness and formality, but offers a more accurate picture of its true nature. In a similar fashion, there exist yet again many differing territorial delimitations for this area, but by using the traditional guidelines, a fairly accurate picture is again obtained. The modern political, as well as "original" Soviet definitions do not do real justice to the scope of its history.......

Bounded in the north by Southern Siberia, Central Asia contains much of present day Mongolia, the greater portion of western China and in the west  it is bounded by the eastern shore of the Caspian Sea; the southern portions contain the northwestern part of Iran, the whole of Afghanistan and Punjab and Kashmir. The core of this area consists of the six former Soviet Muslim republics in this order: Turkmenistan, Uzbekistan, Tajikistan, Kyrghyzstan and Kazakhstan. In consideration of its natural ethno-geographic boundaries, experts agree that the River Indus in Pakistan forms its easternmost boundary, but its cultural influence actually extends beyond that into Pakistani and Indian Punjab and Kashmir. Likewise in the South, Balochistan is similarly affected - and in the western direction, one may well bring Azerbaijan and other parts of Transcaucasia into this sphere - right up to Anatolia (modern Turkey) beyond.

This whole area covers both of two succeeding ancient and medieval cultural domains, Iranian and Turkic respectively, which subsequently overlapped and melted into each other, which were known as Khorasan (an area of former Persian domination in which Persian cultural and linguistic influences prevailed) and Turkestan - or Land of the Turks, a similarly vast, but latterly formed entity that defined Turkic racial and cultural influences. Both names can also be used interchangeably. The definitions are very loose.

With time Persian political ascendancy waned, and Turkic supremacy grew at the start of the medieval era - and Islam arrived after 643 AD to add the key third ingredient to the melange of this amalgam of cultures and races.  It is by employing these definitions that I arrive at my definition of Central Asia. So both these labels, Khorasan and Turkestan are accurate and have have stuck in separate usage, as have the Persian and Turkic cultures - which under the umbrella of Islam - have given rise to a unique and closely formed Turco-Iranian Islamic compound, that finally encompassed both the worlds of Iran and Turan!

Alexander the Great's Macedonian armies were the first known European incursions here. Ancient Greek involvement in Central Asia was extensive, yet has left surprisingly little lasting influence given its scope and extent.

This is the area that was later to be straddled by the fabled "Silk Route", by which trade was conducted between Roman dominated Europe - and the legendary Eastern worlds of Persia, India and China. Later on, when the Mongols swept over Central Eurasia, and gained control of it, the Italian traveler Marco Polo and a handful of Jesuits and Franciscan missionaries were the only Europeans to venture here - on their way to the court of the famed Mongol Khan Kublai. Nestorian Christianity, from the Armenian Church was known in these parts, but never reached significant proportions.

Central Asia was made up of several little kingdoms and principalities, and overlaid by shifting empires.......later, as a result of the the European Renascence which initiated the "modern" era, this area was to become the chessboard for a geopolitical "Great Game" between the two major European world powers of their time - the British Empire, and Tsarist Russia. By 1885, Russia was in possession of the greater part of Central Asia, China had Sinkiang (Xinjiang or Chinese Turkestan) since 1745, and Britain was in control of India, with influence in Afghanistan and ruling parts of it. The stage was set for the picture as we still see it, today.

The present political situation of the Central Asia and its status is but an extension of the original "Great Game" - but is even fraught with even more danger and explosive intrigue, as vast deposits of the hydrocarbon and other mineral resources crucial to the survival of modern technological and industrial civilisation are now involved and at stake: the British have been succeeded in order of precedence and direct command by their protege the USA, while Russia is still a mighty world power and is the main Eurasian contender in the region; China is growing from might to might - and a whole array of secondary powers and client "auxilliary" states like Pakistan, Iran, Saudi Arabia and India are also in the fray.

Nowadays, the focus and concern of everyone in this region is on the Pashtun state of Afghanistan, an unstable and wild land to begin with - and now a failed state and tribal society on Western life-support, provided to it by NATO-ISAF forces. Neighbouring Pakistan is better, but its rulers' legendary corruption have brought this powerful, nuclear-armed state to the brink of dysfunctionality, economic collapse, civil war and social breakdown......the writer of this essay Arif Akhundzada is a Pakistani Pashtun himself. If Central Asia is the key to the world, and is its heart - then the "AfPak" region is the heart - and key - of Central Asia.........

The Afghanistan-Pakistan region, with the Indus River as the marker, denotes a crucial and sensitive geographical and cultural faultline between the Turco-Iranian Central Asian world, and the subcontinental Indian one. This has been a turbulent and disturbed area for centuries. And India itself was always under the influence of Turks and Iranians; in the last 2500 years, there have only been two short instances in which actual Indian dynasties ruled India - that of the Mauryas immediately after Alexander the Great left, and the Guptas in the 6th Century AD. It was the British and their Indian empire, that sufficiently empowered the Indians with modern culture and education - to be able to govern the two ethnic Indian controlled states of India and Pakistan that we see in existence today.

To conclude, it has to be mentioned that all political analysts, students and commentators on ancient history to the present geopolitical "think tanks", have recognised the maxim that: "He who controls Central Asia controls the whole world"......respectable analysts and politicians like the British Imperial administrator and expert on Pashtuns Sir Olaf Caroe, and the noted American strategist and politician Zbignew Brzezinski have all acknowledged this fact.

It is with this in mind then, that I stress upon the readers of this essay that the continued and future centrality and importance of Central Asia for the world will remain the same - and as decisive now, as it was 2000 years ago in the time of the Scythians, and 1500 years ago in the time of the Huns....both of whom originated here, and transformed Europe to its core!!! Even the New World has not escaped Central Asian primacy: the "Amerindian" races all originated in and around the Altai, in northern Central Asia.........