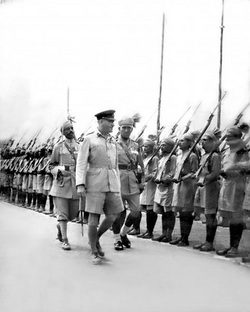 Amb was known as Embolina during Greco-Bactrian rule two millennia ago, and was a princely state ruled by a Turco-Mongol family called Tanoli - and had a sizeable Karlugh Turk population; it contains several locations with Turkic related place names such as Tarnawa, Tarnawai, and Tanawal.....and Haplogroup Q1b has been detected here in the royal family of an earlier Turkic stock, namely the Swati-Jehangiris, who ruled the adjacent Swat principality from about 1009 AD to 1519 AD. This suggests an Ashina origin for the Swatis.....and they probably came here with the first Muslim Turks, the Seljuks, as their tradition states.

The later Karlugh arrivals in the area were in around c.1400 AD, with the Turkic conqueror and descendant of Genghis Khan,Tamerlane and his armies - and they gave this region its present name of Hazara. This occurred just after the great Khazar empire had been decimated first by the Mongols and then dispersed by the Bubonic Plague.

So, we may conclude that those Karlugh invasions could well have included Khazars too, who brought the Khazar place names to the area, as well as the murky yet strangely lingering tradition of Jewish origins for certain Pashtun tribes. They certainly came from the same areas. The name Hazara is derived from the Persian word "hazar", meaning one thousand, which was the number of soldiers in the basic legion or unit of Gengis Khan's Mongol armies; the term was later kept in use by all the diverse Turkic successors of the Mongols, among whom both Tamerlane and the later Tanolis figured, yet a full century lay between these two. 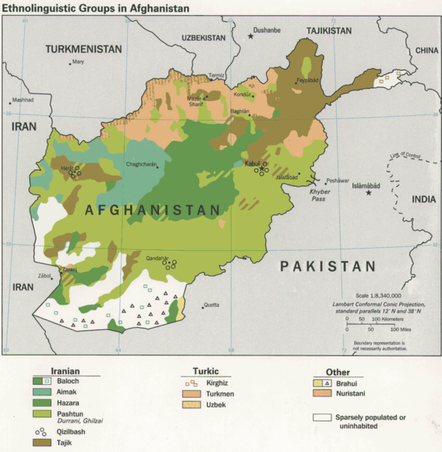 Arif's Commentary: I personally don't give this theory much credence, yet it still persists. Of course, in the present internet age, many people who aren't fit to have a voice, do - and among those are many, both crass Jews and crass Pashtuns alike who believe in, and want to promote this theory (especially those who want to appear friendly in the West).....and in order to do that, embellish the story with lies, that only a local like me can detect. This one is a Muslim production.

But the justifications this bugger gives are absolutely ludicrous: The "cloaks" he mentions are worn in many other Central Asian and Subcontinental cultures - as are the turbans; "Rabbani" is an Arabic name meaning "from God" - but Arabic and Hebrew are so similar, that to the uninitiated they seem to be the same! (I often call Islam and its culture "bastardised Judaism"!) "Yousaf -zai" means the Sons of (a certain tribal chief called) Joseph - but a Pashtun Joseph, not Prophet Joseph of the Old Testament; Yousaf is merely the Arabic version of Joseph that came into vogue here with the arrival of Islam 800-1000 years ago...... It is as simple as that! Before, this tribe was known as "Asap-zai" (the Sons of the Horse - as horses were revered and holy animals in Zoroastrian lore) - so they conveniently replaced "Asap" with the similar sounding "Yousaf" upon conversion!

There are so many other examples of such "convenient" name changes..... But the most ridiculous example is of the "Levy"....Levy in this case is not the Jewish "Levi", but is an old English word, as in "levying" of  taxes! In the old days when the British ruled the Pashtuns, they would raise or "levy" a small militia force of local citizens - which would be tasked and entrusted with the security of their town or village....my great uncle was himself a Levy Commander in our local village militia in the 1880s, and the Malakand Levy that is mentioned in this video is a very famous example of a Levy force; it exists even today, under the same name: http://en.wikipedia.org/wiki/Malakand_Levies and http://www.malakand.8m.com/shopping_page.html ........

HOWEVER, we include this video in CADA's video section, pointing out the above lies, of course - and with a caption describing it as "another side" of the Pashtun story......we must give it place, as this notion does exist in our folklore.

On the Pashtun tradition of their Jewish origins......

There is a widely touted theory of Jewish racial origin for  the Pashtun (Afghan) tribes. Its origins are unknown and improperly documented and are very old, as they can not be traced effectively. But despite the fact that almost every Pashtun is a fanatical adherent of Islam in one form or another, the idea has widespread if schizoid appeal.

Pashtun origins are ancient, turbulent and widely varied, but can be classed in three main groupings: Indo-Iranian (c. 550BC), Indo-Scythian (C. 1st - 3rd Century AD), and White Hunnish (C. 450 AD). Their initial appearance began with the mixing of Iranian Aryans and Indian Aryans when Cyrus the Great of Persia conquered what is now Afghanistan (then called Eastern Iran, Bactria, and Gandhara right up to the west bank of the River Indus) - and added these areas to his vast Achamenian dominions.

Cyrus was also the man who released the Jews from their fabled Babylonian captivity. A good many of these Jews may well have remained in his empire and gone to other parts of it, and settled there to do trade and start new lives. There are, after all, Iranian Jews who are still very much thriving. But even so, there is no mention or tradition of any individuals moving to Eastern Iran, let alone whole tribal or community movements in this regard whatsoever. Nor are there any clearly mentioned tribal family trees or patriarchs, about which Pashtun tradition is otherwise very explicit.

All recognised foreign scholars of Pashtun and Afghan history believe this strange assertion. There was, however, a sizeable and ancient Jewish community of traders resident in many urban areas of Afghanistan for many centuries till about 30 years ago when the US sponsored anti-Soviet Islamic "jihad" forced them to leave, but there were no claims from either them or Pashtuns regarding any mutual relations or affinities old or new: http://en.wikipedia.org/wiki/History_of_the_Jews_in_Afghanistan

But there has to be some reason, in the collective unconscious of the Afghan cultural psyche for this deep rooted and strongly persistent allusion to Jewish origins for Pashtuns. I believe the solution to this mystery may lie in much later Jewish converts, and not in the original Israelites: after the Scythian and Iranian era of dominance had passed in Eurasia - came that of the Turkic race....and the last main racial influence that was brought to bear on Pashtun racial composition, was that of the proto-Turkic Hepthalite Huns starting about 1500 years ago. That change may even be classed as more important to the Pashtun character than the older Iranian basis of Pashtuns, in many ways.

With the Hepthalites was begun a very intense and long-drawn connection, established between the general body of the Turkic Eurasia and Pashtuns; but, as with 95% of all Pashtun history - it went miserably undocumented, and we have to rely  mostly on archaeological and forensic methods - as well as the revolutionary young science of anthropogenealogy - to shine the light of proof on these long forgotten paths and links......about 300 years after the Hepthalites made the last major transformation in Pashtun ethnogenesis, a section of those Turks called the Khazars erected a major Eurasian feudal state, and converted to Judaism for politically expedient purposes.

To put it very briefly, the undocumented Turkic-Pashtun traffic must have continued for the 500 years that the Khazar Empire existed - and in the end when the Mongols and the Bubonic plague dispersed it in diverse directions, many of those Khazarian Jews could have ended up here - there are many Khazarian sounding place names....but they will have been most likely forcibly converted to the newly implemented creed of Islam - the fire of the zeal of which was burning ferociously then.....it is along these lines that I seem to think that this deep-seated notion took shape......it will doubtlessly need more investigation though. (Arif Akhundzada). 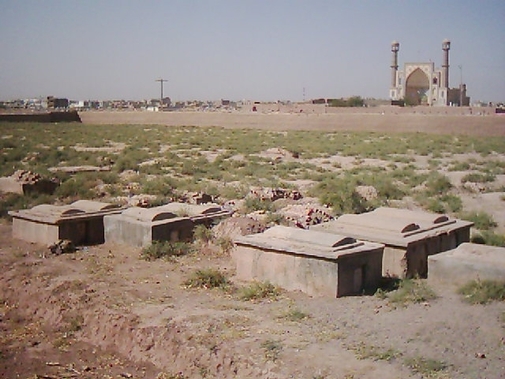 A Jewish Cemetery in Herat, Afghanistan
We do NOT IN ANY WAY support the Aryan Nations or neo-Nazi conclusions of this film, but it does supply some agenda-free historical insight into the migratory background of Central Asia. Offensive material is at the end of the film, so you may stop it there to avoid discomfort.